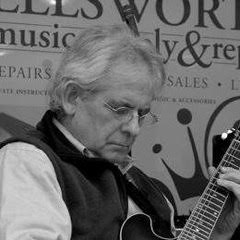 To Richie: "I've been playing guitar since I was 14 mostly by ear, and focused on rock and folk.  About 6 years ago, I made an effort to learn to read music and was interested in jazz in particular. That led to lessons and getting together with a bunch of jazz wannabes on Friday nights.  The problem was I was playing rhythm off lead sheets (using those chunky chords rather than the first four string set), but soloing was virtually impossible for me due to the rapidity of the changes and the fact that I didn't know the fretboard.  Trying to learn chord extensions, scales, and arpeggios simultaneously left me frazzled and confused.  As a result, I did little more than revert to playing pentatonic licks when it came time to solo. In short, I became discouraged and pretty much stopped playing.

Then I found your Bebop Guitar Improv Series course. I've taken it slow an steady, putting in the time to learn chords, scales, and arpeggios using your method.  You don't pull any punches regarding the time and effort.  It takes time to learn it takes time. But I've learned more from your course in less than a year than I learned in the previous five.  That because you present material in a logical, ordered way, that builds a step at a time.  That got me to practice basics slowly and methodically, rather than frantically jumping from one thing to the next without having much of it sink in. I've still got a ways to go, but thanks to you, i'm learning incrementally by building on basics.  And its fun again.  Thanks "